THE BREWERY IN GOOD COMPANY, OUR NEIGHBOURS

The brewery is located opposite the medieval castle  and the Saint - Martinschurch of Herzele.

It is therefore the ideal starting point for many walking, cycling or discovery tours through Herzele.

CASTLE OF THE LORDS OF HERZELE - THE MEDIEVAL CASTLE

The castle is a symbol of the glory of Herzele, an important area within the Land of Aalst. This fortification, of which important parts are still visible today, was built according to a geometrical ground plan and dates from the 13th century. It was initially inhabited by the local lords.

In Ghent's struggle against Lodewijk van Maele, Count of Flanders, Seger van Herzele was an ally of Ghent. In 1381, the count had the castle set on fire in retaliation and confiscated the property. Moments later, the seigniory was given to the lords of Roubaix and the castle was restored. From now on, the domain was remotely controlled. In 1579, the Catholic Spaniards, in their struggle with Protestant Flanders, shot the castle in the rubble.

Through marriages, inheritances and sales, the castle and the domain finally came into the hands of the family du Parc Locmaria during the 19th century. In 1969, the municipality of Herzele bought the castle ruins and started restoration work. Today, part of the castle moat, a restored residential tower and the consolidated substructure remain.

The castle site grew into Herzele's tourist visiting card and the place to be for numerous events. It is one of the few medieval castle sites in our province in original condition.

The Sint-Martinus church is a cross church with a partly walled cemetery. As you enter the church, you can admire five beautiful stained glass windows painted between 1934 and 1955. The hull of the tower is unusual. Each side has been crossed in a different way with pointed arch shaped holes.

Saint Martin, also known as Maarten van Tours, was the bishop of Tours. Legend has it that at the age of 15 he gave half of his cloak to a beggar, who turned out to be an apparition of Jesus. Maarten could only give half of his cloak because the other half belonged to Rome. Thus Saint Martin became the symbol of charity.

https://issuu.com/lokaalbestuurherzele/docs/brochure_toerisme_herzele_2019_enBrowse through the experience brochure of Herzele... 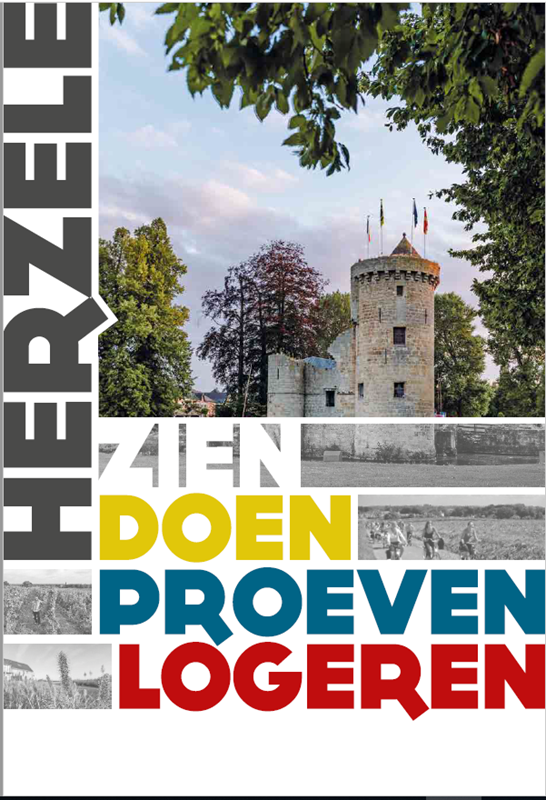